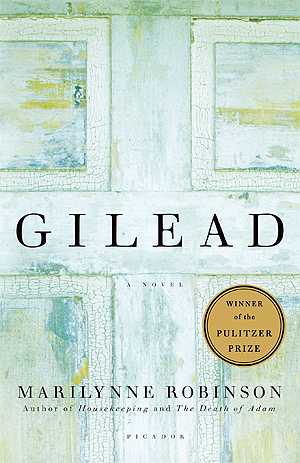 Marilynne Robinson is one of those authors who has been around for decades but whom I have only just “discovered.” Said discovery was not so much organic as it was the result of a friend of mine insisting that she was one of the most amazing writers she had ever had the pleasure of reading, coupled with the un-recommendation of my entire bookclub. Too depressing, they said. Nothing happens, they said. Everyone dies, they said. What was the title again? I said.

I read Housekeeping in the middle of November last year. The weather outside my window was a mixture of seemingly-endless pouring rain and asphalt-meltingly hot days, neither of which went with the frozen, foggy, water-logged world described in the novel. I loved everything about Housekeeping, from the bitterness of the landscape to the inscrutability of the characters; I loved that it was narrated by a woman looking back on her childhood but that you somehow got the sense that the narrator was a child, living through the events of the novel as you read them: it was nostalgic and immediate all at once.

So I picked up Gilead for my first read of the year with high expectations, looking forward to falling in love and having my heart broken all over again. The experience was not quite the same as Housekeeping – there is, after all, 23 years between the publication of it and Gilead – and although I was thrown by this slightly at first, the longer I read the more delighted I was; that two novels from a single author could produce such different reading experiences is in a way astounding. Nevertheless, there’s a common thread: nostalgia. The pull-and-push relationship the narrators have with their hometowns. The strange relationship between place and feeling, between history and the present. Gilead confronts these odd connections more directly than Housekeeping, something that I think is a result of its narrative voice: the novel is told in one long breath, part diary, part confessional, part therapy-session, and part farewell letter. The narrator, John Ames, a third-generation preacher who has lived his whole life in the dusty town of Gilead, is dying, and so he undertakes to write a work for his young son that is part family history, part fatherly-advice/time capsule: it is his hopes for the future, as much as it is about his life and his father’s life and his grandfather’s life.

The way that that past intrudes upon the present is an unavoidable part of John Ames’ character, though, part of what keeps him up at night and part of what motivates him to write to his son. He worries about the church he has preached in all these years being torn down, about bits and pieces of it being destroyed because people do not understand or remember the significance of the painting in the hall or the roster on the spire. He worries about his friend, Boughton, and his son: Ames’ godson and namesake. He worries about what will become of his much younger wife and about the things he cannot control: that his family might need him in the future, but that he will not be there to help them.

Gilead is a sweet, sad novel with an arrestingly good narrator. He writes in his diary the way I write in my diary: to record things but also as a tool with which to marshall one’s thoughts. The supporting characters are all introduced quite naturally, without any forced descriptions or awkward moments of exposition: Ames assumes his son will know certain key people, and as a reader you put together their significance from context and as the novel progresses. It’s a deceptively simple writing style, the kind of thing that might seem easy to emulate from the outside. I am definitely envious of Marilynne Robinson. It also seems like a simple book, as though it is going to be a collection of family history stories mixed with the narrator’s present-day thoughts, but it ends up being something much more thought-provoking and insightful. With Ames being a preacher, a lot of the subject matter is religious, but even non-religious readers will find something to think about in Gilead.